OpenSim has suffered a number of shocks in the past year, with several significant grid closings in a row.

OpenSim’s largest closed grid, InWorldz, shut down last summer. Its successor, Islandz, closed earlier this year. Virtual Highway shut down in December. We lost both Lost Paradise and its owner this past year. Sanctuary, my favorite hypergrid hyperport, was last online last summer. YrGrid, known for its gambling and use of Bitcoin, went down last summer after a crowdfunding effort failed to save it. Genesis Global Journey shut down a year ago. AllCity is gone, after being at the top of the charts in 2017 and 2018 — and getting top scores from our readers in 2016.

Sure, grids come and go all the time, but this past year seems particularly bad. Our database shows 121 grids that closed down in 2018, most of them disappearing quietly. (Some might still come back.)

But things seem to be turning around. This year, only 37 grids were marked as closed. And, of those, only Sunlight and Infiniti Grid ever had more than 100 active users. 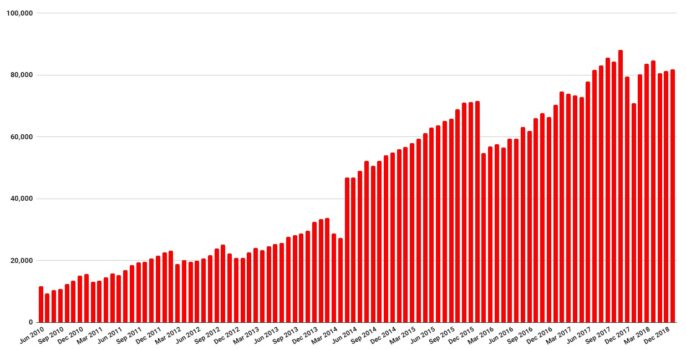 These stats do not include most of the mini-grids running on the DreamWorld distribution of OpenSim, or private company or school grids. DreamWorld, for example, reports that 3559 grids are either currently offline or running in private mode, behind a firewall.

OpenSim is a free, open source virtual world platform that’s compatible with the Oculus Rift. It allows people with no technical skills to quickly and cheaply create virtual worlds, and then teleport to other virtual worlds. Those with technical skills can run OpenSim worlds on their own servers for free, while commercial hosting starts at less than $5 a region — compared to $300 a region for the same land in Second Life.

A list of hosting providers is here. Download the recommended Firestorm viewer here. And find out where to get content for your OpenSim world or region here.

You can also add your grid in the stats if it is not being crawled by OutWorldz. OutWorldz also provides OpenSim users with free mesh items, OARs and free seamless textures that you can download and use on your grids.

When it comes to general-purpose social grids, especially closed grids, the rule of thumb is: the busier, the better. People looking to make new friends look for grids that already have the most users. Merchants looking to sell content will go to the grids with the most potential customers. Event organizers looking for the biggest audience… you get the idea.

The hypergrid continues to dominate. 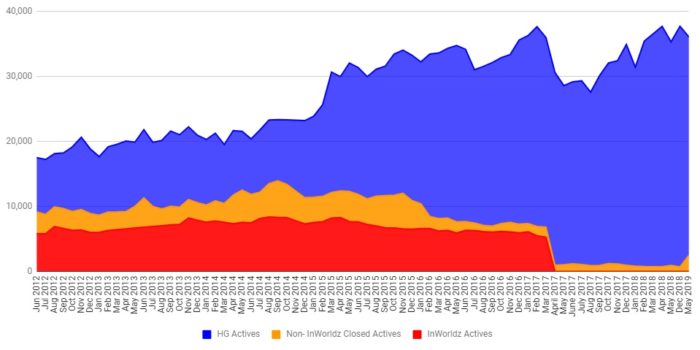 As you can see in the chart above, InWorldz (the area in red) dominated the active users numbers of non-hypergrid worlds. Once that grid closed, the number of active users on closed grids dropped dramatically.

This month, hypergrid-enabled grids accounted for 98.6 percent of OpenSim’s land area, for 93 percent of its active users, and for 23 of the top 25 grids by traffic.

Top 25 most popular grids this month:

The actives list is based on active, unique 30-day user login numbers that grids report on their stats pages. Those grids that don’t report their numbers might be just as popular, but we wouldn’t know. The active user stats are also used to generate the popular hypergrid destinations list, which is useful if you have a hyperport and want to put up gates to the most popular grids, or include the most popular grids in an in-world directory.

This list is also a good place to start if you want to open up new stores or hold events, or are just looking for places to visit.

I measure active users by counting both local residents and hypergrid visitors. After all, hypergrid visitors attend events and spend money just like anybody else. If I’m looking for a happening grid, I want one with a lot of people on it — and I don’t really care where their home avatar is based. In fact, several grids are encouraging users to have their avatars on other grids, such as Kitely or OSgrid, in order to reduce the load on their own servers. Many grid owners are also increasingly willing to rent land to visitors, and even give free store space and homes to visitors as well. Their money, after all, is just as good.

Yes, this means that people are double-counted, based on all the grids they visit. But they’d also be double-counted if they created new avatars on each grid. So it comes out even in the end.

Here some information on how and why you should set up a stats page for your grid. Of course, not all grids need a stats page, especially grids that aren’t open to the public, like school grids, private company grids, small family grids, and so on. From prior surveys, this “dark metaverse” of OpenSim grids might actually be bigger than the one we know about, because those grids don’t need to promote themselves, and we never hear about them.

The list below is a small subset of existing OpenSim grids. We are now tracking a total of 1,428 different publicly-accessible grids, 284 of which were active this month, and 224 of which published their statistics.

All region counts on this list are, whenever available, in terms of standard region equivalents. Active user counts include hypergrid visitors whenever possible.

Many school, company or personal grids do not publish their numbers.

The raw data for this month’s report is here. A list of all active grids is here. And here is a list of all the hypergrid-enabled grids and their hypergrid addresses, sorted by popularity. This is very useful if you are creating a hyperport.

You can see all the historical OpenSim statistics here, including polls and surveys, dating all the way back to 2009.

Below are the 40 largest grids by total land area, in terms of standard region equivalents.

I have to confess, haven’t done one of these stats reports in a long time. But then I was writing the AviWorlds and Kitely stories yesterday and wanted to be able to compare them to other grids. So then I ran the stats. And as long as I’m running the stats, I might as well publish them, in case anyone else wants to see them. And update the active grids list and the popular hypergrid destinations list.

And I also realized that all of the Google Plus social media links are gone. I’m contacting all the grid owners that I have contact info for and asking them where they’re posting grid events and announcements these days, so people can find what’s happening.

If I don’t contact you, or if there’s anything else missing from these pages, please email me at [email protected]. And don’t forget that there are a lot of other ways — free ways — to promote grids on Hypergrid Business.