If you look at the Hypergrid Business list of OpenSim grids that rent regions, you’ll see that the prices are ridiculously low when compared to Second Life.

A “standard region” — 256 meters by 256 meters, capable of holding up to 15,000 prims — can be had for less than $5 a month, and is perfectly fine if you want a place to do some light building and maybe have a couple of friends over.

More typically, expect to pay around $15 a month. That’s what the largest commercial grid by land area, Kitely, charges. Even OpenSim’s most successful closed commercial grid, Tag Grid, charges just $15 a month for a standard region.

And you typically get much more functionality than you get with a standard Second Life region. Kitely regions, for example, called “worlds” on their website, are two-by-two islands that can hold up to 100,000 prims. On Tag, you can choose the size of your region, either standard size, or a two-by-two, or a four-by-four, at no additional cost.

These kinds of features — more prims, more land, more users — are commonly available throughout the OpenSim grids, sometimes for free, sometimes for a small additional cost.

But you don’t have to settle for land on someone else’s grid. You can have your own.

When I had my own grid, Hyperica, it was a mini-grid, hosted by Dreamland Metaverse.

A mini-grid is an OpenSim grid that fits on a single computer or server. There’s a limit to how big they can get, since all the regions have to fit on that one computer. Mini-grids, technically known as “standalone” grids, are typically four to 16 regions in size, but can get bigger if you have a more powerful computer.

At Dreamland Metaverse, a standalone mini-grid starts at $45 a month.

With a mini-grid, you get your own domain name and hypergrid address, and a stripped down website.

If your hosting provider uses DreamWorld to set up your mini-grid, the website will look something like this: 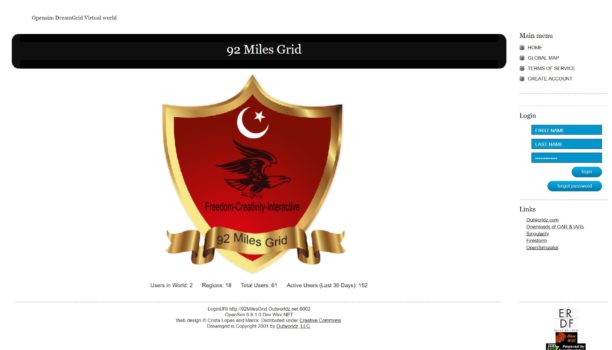 If your hosting provider uses the Diva Distro version of OpenSim, your home page will be a “wifi” page that looks something like this: 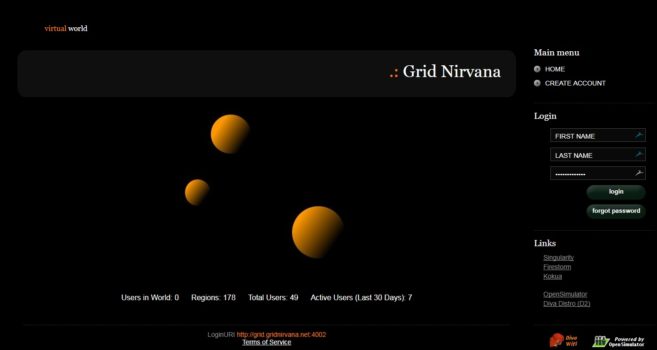 That gives your users the ability to create new accounts and to check grid statistics. Some grids create a nice-looking official home page, then link to the “DreamWorld” or “WiFi” page for the stats and user account functionality.

A mini-grid is a great option for people who want to have a small grid of their own to play on, to hold classes or business meetings, or to hold small events. And you don’t have to deal with any grid politics — as long as you don’t violate any laws, the grid is your own, and you can do on it whatever you want. You decide who gets to be a user, you decide what content is allowed on the grid, and you decide whether to allow hypergrid teleports or turn them off.

But once you start to rent out land, hold a lot of big events, and have more regions than what a single computer can hold, then its time to upgrade to a full grid.

Run your own full-size grid

The difference between a full grid and a mini-grid is that a full grid can be spread over several servers or computers. That means that it can grow almost indefinitely.

You can also put each region on its own server so that if a region goes down, it doesn’t take down any other regions with it. That’s useful if you are renting regions out to people who expect a certain level of stability.

Running your own grid takes quite a bit of technical skill.

So what do you do if you don’t have those technical skills, and don’t want to manage programmers? You use an OpenSim hosting provider.

I already mentioned Dreamland Metaverse. Their prices start at $45 a month for the central grid service, plus $30 each per region. There’s no set up fee, and they’ll have your grid up and running in three days.

Another popular option for commercial grid hosting is DigiWorldz.

The full list of independent OpenSim hosting providers doesn’t include DigiWorldz because they don’t have a webpage up that explains their grid hosting offer. You will need to contact them and negotiate a custom price based on your requirements.

Run your own for free

If you have a spare computer sitting around, and a decent Internet connection, you can run your own OpenSim, for free.

The most popular option is to download the OSgrid OpenSim Installer and you can have as many regions as you want, for free, on OSgrid. Not only does OSgrid let you have regions for free, but they’re also the biggest testing ground of new OpenSim features, so please donate. The donations help cover the costs of the servers they need to handle all the central grid services, such as the map, messages, user inventories, and the asset database.

Metropolis has a similar system, but you have to pay 1.50 Euros a month for the connection.

If you don’t want to be part of any grid, but have your own little grid for fun and friends, then a mini-grid might be the best option. A mini-grid — technically called a standalone — is a grid where all the regions can fit on a single computer. So the more powerful your computer, the bigger your mini-grid. Typically, mini-grids start at four regions, then go up to 16, and then up from there.

Currently, the single best way to set one up is with DreamWorld.

You can do it either on a spare computer, or a server you rent from an online hosting provider.

“I have a 2016 Server with 8 GB and 2 cores somewhere overseas, I forget where, just for testing,” said dreamWorld creator Fred Beckhusen. “It runs about $25 for a grid — 8 regions or so, a couple of gigabytes of prims.”

But most people just get a cheap PC, or use an old PC at home and save the money, he said.

Another option is the DivaDistro version of OpenSim, from hypergrid inventor and OpenSim core developer and all-around superhero Crista Lopes.

Finally, there’s a full grid. Most commercial grids are full grids, with centralized grid services such as Robust.

The regions don’t have to all be on the same computer. The central grid server organizes everything so you can have as many regions as you want — just add more computers, or more online servers, and you can grow the grid indefinitely.

A full grid also offers additional management capabilities that a mini-grid doesn’t have, and, if you want, you can let people attach their own, self-hosted regions.

Beckhusen has a version of OpenSim that lets people easily create a full grid. It’s called DreamGrid, and you can download it for free as well.

“As for capabilities, it has more than most grids,” he said. “Unlike major grids, it has a Icecast server, Tides, Partners, Birds, Crash detect, auto restart on Interval, auto backup, auto update, and it takes just one click to set up a working grid, if your router is any good.  One DreamGrid can run many region servers, just like OSgrid or Metropolis,  and many hundreds to thousands of regions.”

It requires more computing capacity than a mini-grid, but Beckhusen is working to change that.

“One day soon, hopefully by year end, there will a DreamGrid update so you can run any size grid you want in just 8 GB, even on a Craptop,” he said.

If you’d rather handle all the technical setup details yourself, you can also download OpenSim from the main OpenSimulator website.

Nintendo Labo VR Was Secretly Revealed In the First Wave Of...

Jamie Feltham - August 5, 2019
0
Here’s a fun little VR easter egg courtesy of Nintendo. The company’s Labo VR kit was only released a few months ago, but...