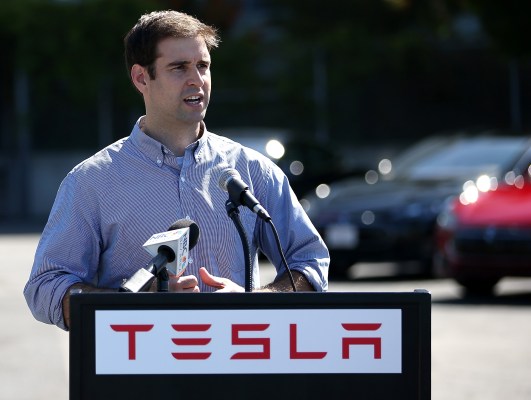 Tesla co-founder and CTO JB Straubel is stepping down from his day-to-day role as an executive at the automaker, CEO Elon Musk announced during a conference call with analysts Wednesday.

Drew Baglino, vice president of technology, will take over his duties, Musk said. Straubel will stay on in a senior advisor role.

“I want to thank JB for his fundamental role in creating and building Tesla,” Musk said during the call. “If we hadn’t had lunch in 2003, Tesla wouldn’t exist, basically,” Musk added.

Straubel described his time at Tesla as an adventurous 16 years.

“I’m not disappearing, and I just wanted to make sure that people understand that this was not some, you know, lack of confidence in the company or the team or anything like that,” Straubel said, adding that he loves the company.

Straubel’s role at Tesla cannot be understated. The executive was responsible for some of the company’s most important technology, notably around batteries. His understated yet steady presence along with his technological acumen gave provided stability even when its CEO became embroiled in controversy.

His departure is the latest in a long string of high-profile executives to leave Tesla in the past year, most recently Steve McManus, a vice president in charge of engineering for car interiors and exteriors at Tesla, who joined Apple. Two other former Tesla executives, Michael Schwekutsch, and chief engineer Doug Field, have also left to join Apple.

Straubel is involved in another company called Redwood Materials, which emerged in 2017. An SEC filing in 2017 a $2 million initial investment in the Redwood City, Calif.-based company that describes itself at its site as focused on “advanced technology and process development for materials recycling, remanufacturing, and reuse.”

The filing lists Straubel and Andrew Stevenson, the former head of special projects at Tesla, as executive officers. Stevenson is now CFO at Redwood Materials.

Budget Cuts 2 Demo Brings a Bow and Arrow to a...