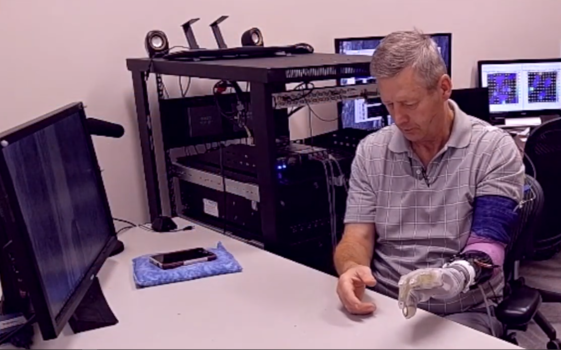 In case you’re thinking that fully immersive virtual reality will require full-body suits of some kind to replicate all the senses, there’s promising research coming out of the medical prosthetics field that shows that we’re well on our way to brain-computer interfaces that will make all that irrelevant.

Scientists at the University of Utah started with an arm created by DEKA Research & Development Corp., a New Hampshire-based company founded by Segway inventor Dean Kamen. 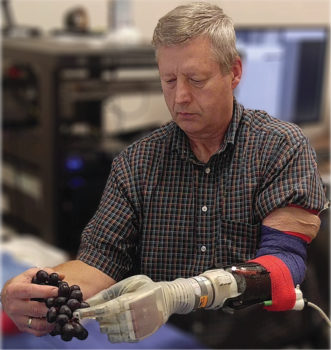 They then connected it to a system that taps into a person’s nervous system.

Today, that system, the Utah Slanted Electrode Array, consists of 100 microelectrodes implanted into the patient’s arm. The system reads signals sent by the brain and translates them into commands to the prosthetic arm. But it also reads signals from the arm and sends them back to the brain.

Right now, the electrodes have to be connected to an external computer, but the researchers are planning to create a wireless version.

“We changed the way we are sending that information to the brain so that it matches the human body,” said biomedical engineering doctoral student Jacob George in an announcement the university released this week. “We’re making more biologically realistic signals.”

One of the test subjects was Keven Walgamott, who lost his left hand and part of his arm in an electrical accident 17 years ago. With th enew prosthetic hand, he was able to pick up an egg without cracking it, pluck grapes without crushing them, and hold his wife’s hand.

According to the announcement, he could this with “a sensation in the fingers similar to that of an able-bodied person.”

Of course, 100 microelectrodes is just a drop in the bucket. Our hands alone have more than 1,000 nerve endings per square inch of skin.

But as computers and sensors continue shrinking, getting there is just a matter of time.

So will we eventually have Matrix-style jacks that plug into the back of our heads?

Something like that. But don’t get one of those. There will be wireless upgrades soon after, and everyone who had one of those jacks install will look really stupid.

A bigger question is what will happen to our bodies while we’re in virtual reality? Will it look like we’re just taking a nap? Will there be some kind of build-in functionality that flexes our muscles and rolls us over so our bodies don’t deteriorate while we’re in-world? Will there be automatic timers that bring us out of VR and force us to take rest breaks? Will we have special VR chairs to sit in, or have to go into some life-support body pod kind of thing?

Given how fast technology is advancing, there’s a good chance that we’ll see all this in our lifetimes. Telecommuting is going to take on a whole new meaning.

Watch a video of the University of Utah system in action below:

‘Virtual Virtual Reality’ Studio to Launch ‘The Under Presents’ on Quest...