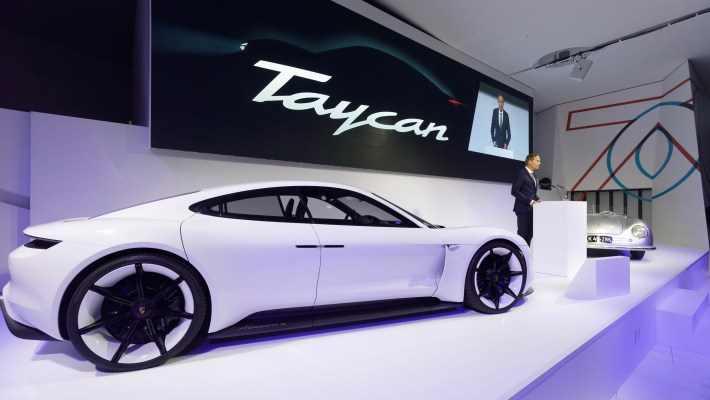 Porsche has secured 30,000 deposits for the Taycan more than a month before the German automaker will unveil the all-electric sports cars, numbers that suggest there’s enough to demand to support the company’s plans to produce 40,000 units in its first year.

The latest reservation numbers were cited by Bloomberg and Porsche HR head Andreas Haffner in an interview with German business publication Handelsblatt.

Porsche initially targeted 20,000 Taycan electric vehicles for the first year of production. But interest in the vehicle prompted the automaker to double its planned annual production to 40,000 in its first year. Reservations require a 2,500 euro deposit ($2,785).

If Porsche is able to produce and then deliver 40,000 Taycans in its first year of production, the electric sports car would leap ahead of some of its iconic internal combustion models, including the 718 Boxster and the 911. Porsche sold 35,573 911s and 24,750 718 vehicles globally in 2018.

The Taycan would still trail Porsche’s other popular crossover and SUV models such as the Cayenne and Macan.

The Taycan could also put pressure on the Tesla Model S, the popular luxury electric sedan that has long dominated this niche in the industry. Tesla combines Model S and X delivery numbers. In 2018, the company delivered 99,394 Model S and X vehicles.

The Model S has had a number of updates since production began in 2012, but it hasn’t had a significant facelift since April 2016 when the front fascia was changed to look more like the Model X.

Tesla CEO Elon Musk said earlier this month that the company doesn’t plan to “refresh” its Model X or Model S vehicles. In automotive speak, refreshed typically means small revisions to a vehicle model that extend beyond the typical yearly updates made by manufacturers. A refresh is not a major redesign, although there’s often a noticeable change to the vehicle model.

The company will make minor ongoing changes to the luxury electric sedan and sport utility vehicle, Musk said at that time. Even with those continuous updates, potential customers could opt for the newer Taycan.

Porsche isn’t resting on the novelty of its first electric vehicle to drive sales. The company is rolling out other incentives, notably plans to give owners of the Taycan three years of free charging at hundreds of Electrify America public stations across the United States. Electrify America is the entity set up by Volkswagen as part of its settlement with U.S. regulators over its diesel emissions cheating scandal.day.

VR Days Europe 2019 to include XR Gaming and LBVR Content...

VR Reporter - November 9, 2019
0
VR Days Europe 2019 to include XR Gaming and LBVR Content Market In its fifth year, the Amsterdam based 3-day conference and exhibition on...

Alyx for the Modding Community

Here Are The Most Popular PSVR Games According To PSN

Crypto Luminary and US Presidential Candidate Brock Pierce Under Heat Over...