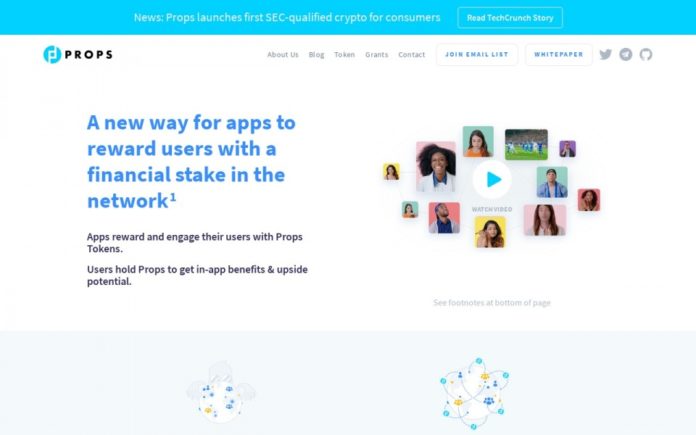 Coinbase and Props Public Benefit Corporation announced today that Props Tokens, the first consumer-facing crypto token qualified by the SEC under Reg A, are now part of the exclusive list of assets available for custody through Coinbase Custody, a platform that stores cryptocurrency for institutional clients.

“Coinbase’s reputation precedes it, and we’re proud to work with them to provide best-in-class asset security for Props community members. This is another important step as we strive to build one of the largest and most trusted consumer-focused token networks, and drive value back to those users that actually help digital networks grow.”

“Props offers interesting use cases for the mainstream consumer adoption of crypto. As more real-world use cases like this mature and start building global communities, Coinbase Custody aims to be their custodian of choice. No other platform can offer the safety and protection of our technology and comprehensive insurance. But more than that, for projects like Props where network participation and validators are critical to the chain’s operation, Coinbase Custody offers the only option that allows for both the secure cold storage of assets and the ability to interact with the network.”

With over 30 million users, Coinbase is one of the most trusted platforms for buying, selling, holding and interacting with cryptocurrency. Coinbase Custody operates as a standalone, independently-capitalized business to Coinbase, Inc. All digital assets are segregated and covered by the company’s industry-leading insurance policies.

The Props Token enables apps to reward users with a financial stake in the network with which they engage. Since launch, Props Tokens have been earned daily and grant exclusive in-app benefits to users on YouNow — the first app on the Props Network — a live-streaming platform with 47 million registered users. While any wallet can be connected to a YouNow and future Props Apps, Coinbase Wallet is the default wallet offered by YouNow to users, enabling anyone to store their Props Tokens. This wallet has tighter integration with the YouNow app, which makes for a smooth UX when using Props.

Companies like  PeerStream, a public company that operates video-powered communities, are already in the process of integrating Props into its consumer apps Paltalk and Camfrog. Additionally, SplitmediaLabs, a gaming-focused community with 13 million users, plans to integrate Props into XSplit, its most popular product.

The Props Network, governed by Props PBC, a Delaware public benefit corporation, is built to empower the people who help digital communities thrive. Props provides open-source infrastructure for a network of apps capable of transparently and fairly rewarding users with a shared token. The Props platform abstracts blockchain’s technological and regulatory complexity for apps, enabling them to easily plug Props Tokens into any app, in order to grant their users unique benefits and a financial stake in the very networks they help grow.

Launched in 2018, Coinbase Custody offers clients access to the secure, institutional-grade offline storage solution that has been used by Coinbase’s exchange business since 2012. Coinbase Custody is an independent, NYDFS-regulated entity built on Coinbase’s crypto-first DNA, offering the most sophisticated and reliable custody solution in the world. All digital assets are segregated, held in trust for the benefit of our clients and protected by an industry-leading insurance program. Coinbase Custody currently offers support for 32 assets. For more information, visit custody.coinbase.com.

The Manor’ Is Coming To The Oculus Quest With Some Updates

10 of the most popular FPV drones on Amazon this fall...