The latest bout in Las Vegas is not taking place in a raucous casino boxing ring, but in the hushed rooms of planning committees. The reigning champion, the Las Vegas Monorail, is facing upstart challenger The Boring Company, in a fight to decide the future of Sin City’s urban transportation.

In May, the Las Vegas Convention and Visitors Authority approved a $48.7 million contract for The Boring Company (TBC) to design and build a short underground transit system at the city’s Convention Center, using Tesla electric vehicles running through narrow tunnels.

The ambitious contract calls for the system, called the LVCC Loop, to be up and running in time for the city’s biggest trade show, CES, in January 2021. Over the next 18 months, TBC has to construct one pedestrian tunnel, two 0.8-mile vehicle tunnels and three underground stations, as well as modify and test seven-seater Tesla cars to carry up to 16 people.

TBC has already submitted detailed construction plans to the city for review, which TechCrunch has obtained, and recently raised $120 million in funding. The company hopes to start construction later this summer.

But TBC’s tight deadlines — and the payments it receives by meeting them — could be jeopardized by the Monorail’s concerns that the new tunnels could undermine its own system. To connect two parts of the Convention Center, the Loop will have to burrow directly beneath the Monorail’s elevated tracks.

“The proposed underground people mover system intersects our existing system route, and it appears the presented tunnel alignment interferes with our existing columns for the Las Vegas Monorail system and creates significant concern regarding both vertical and lateral loads,” Monorail CEO Curtis Myles wrote in a letter to Clark County planning officials in June.

Chris Kaempfer, a lawyer representing the Monorail, clarified the company’s position at a meeting of the Winchester Town Advisory Board the same day.

“When you have columns that would be this close, you’re not just concerned about contact with the columns, you’re also concerned about vibration,” Kaempfer said. “The record has to be absolutely clear, if there’s any damage at all to the columns, it will shut the Monorail down.”

Kaempfer lobbied the advisory board to increase oversight of the TBC project, and require the company to work with the Monorail and city officials during construction to prevent damage to the train system’s columns.

“It’s extremely important to the Monorail that everyone acknowledge that this potential exists and that it needs to be appropriately addressed,” Kaempfer said.

TBC pushed back against any new restrictions, telling the board that it was already committed to protecting existing infrastructure along the Loop’s route.

“[Tunneling] noise and vibration are imperceptible at the surface. We design our process to be deep enough underground such that a person walking [at ground level] creates more vibration than our tunnel-boring machine underground,” said Jane Labanowski, TBC’s government relations executive.

At the final bell, the Winchester Town Board awarded this round to the Monorail, conditioning the Loop design’s approval on regular coordination between TBC, the Monorail and the city’s Public Works department. “That way we all have a point of reference to go back to, just in case somebody forgets or doesn’t check in with other people,” said the chairperson. “All of a sudden, someone gets to be a bad actor who doesn’t mean to be.”

TBC did not respond to requests for comment for this story.

While the Monorail and Elon Musk’s Loop don’t yet compete directly, TBC’s ultimate ambition is to expand the LVCC Loop from a campus people mover to a Vegas-wide transit system serving the airport, the Strip and beyond.

The Monorail itself started as a short, one-mile system shuttling tourists between the MGM Grand and Bally’s Hotel, using monorail cars bought from Disney World in Florida. It now extends nearly four miles and carries up to 67,000 passengers a day during its busiest times. 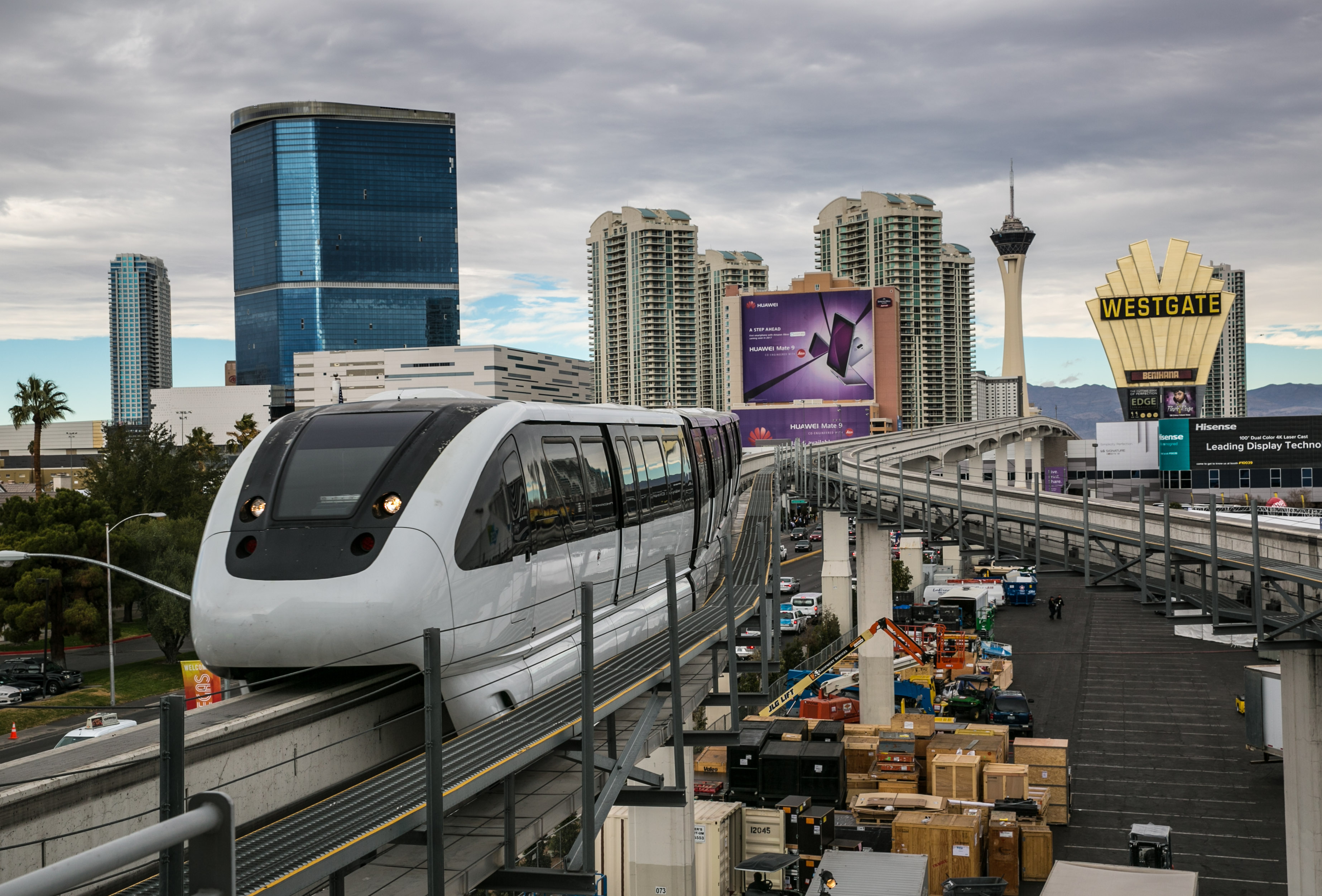 The Las Vegas Monorail crosses over the Las Vegas Convention Center as viewed on January 4, 2017 in Las Vegas.

TBC has promised that the Loop will be able to handle up to 4,400 passengers an hour — equivalent to more than 100,000 a day — as soon as it becomes operational. Its website states that the total journey time between the farthest LVCC stations will be around one minute. This means that the Loop will need at least six 16-person vehicles operating simultaneously to hit its goal. However, a one-minute journey might not be realistic at busy times. New York and Boston subway trains regularly stop for more than 30 seconds at popular stations.

At the Winchester meeting, Labanowski also revealed further details about the Loop’s vehicles and operations. Although TBC’s website states that the system would use autonomous vehicles, presumably using Tesla’s Autopilot technology, Labanowski said the LVCC Loop vehicles would actually also have human drivers “for additional safety.”

Loop plans submitted by TBC to Las Vegas show a modest glass structure at surface level, with elevators, escalators and stairs leading down to a mezzanine level with gates, and then down again to three platforms. With no room at the platform level for vehicles to turn around, it appears TBC’s people movers will operate in both forward and reverse.

And although TBC hopes its Loop system will eventually span the city, a TBC contractor at the Winchester meeting said that public access could be limited for now. “We will monitor how it’s open to the public based on our commitment to our trade show customers on any given day,” said Terry Miller of the Cordell Corporation, which has been awarded a $1 million contract to oversee the project. “During CES it will be a little more difficult to have the public coming in and out than it would be for a [smaller] trade show.”

The next challenge for TBC is getting all the necessary permits to excavate a shaft to deploy its tunnel-boring machine underground. Its schedule calls for construction to begin in September.

Haptical - April 7, 2019
0
StoryUP Studios makes Healium, a virtual and augmented reality mindfulness platform powered by the user’s heart and mind via their wearables. The three-year...