Home Online Marketing Which Is Best for Business?

The slew of social media channels available today can paralyze even the most savvy business owners.

Where do you start? Which one is best? How do you avoid wasting time on channels that won’t bring in a solid ROI?

The struggle is real.

And, when it comes to Facebook and LinkedIn, the differences between the two can seem tremendous.

Facebook is for sharing pictures of your family vacation, connecting with old friends from school, and sharing viral videos — right? Meanwhile, isn’t LinkedIn meant for keeping track of colleagues and making professional connections that further your career?

The answer, of course, is yes.

But because both platforms are people-based, they provide a number of opportunities to reach your audience. In fact, 78% of American consumers have discovered products on Facebook.

On the other hand, LinkedIn is the most effective platform when it comes to delivering content and securing audience engagement.

Which leaves us with this question — which one should you choose to focus your efforts?

At its core, LinkedIn is a professional network that was initially created as a corporate recruitment platform. Now, it boasts many features similar to traditional social media sites, including status updates, blogging capabilities, and private messages.

Facebook, on the other hand, was specifically designed as a place for people to share and communicate. The “sharing” element is its most prominent selling point, but there are still plenty of other features that allow businesses to effectively reach their audiences.

LinkedIn and Facebook both have the Groups feature that allows you to connect with other like-minded people, and they both have powerful Ad setups.

So with pretty similar features, what are the key differences between the two?

Facebook has an astounding 2.38 billion active users across the world, which makes LinkedIn‘s user base of 630 million seem small in comparison. Plus, both audiences are made up of a diverse array of people, but LinkedIn tends to have a more professional clientele, or those with a deep interest in business.

Perhaps what’s most fascinating, though, isn’t how many users each platform has, but how much time these users spend on each respective site.

On Facebook, people spend around 35 minutes a day scrolling through their feeds and engaging with their friends, whereas LinkedIn users spend just 17 minutes a month using the site.

That being said, you could argue that when people log into LinkedIn, they’re actively looking to do or find something, rather than just aimlessly scrolling. This is important if you’re looking to use these platforms for more than just sharing your latest updates.

2. LinkedIn is better for lead generation. 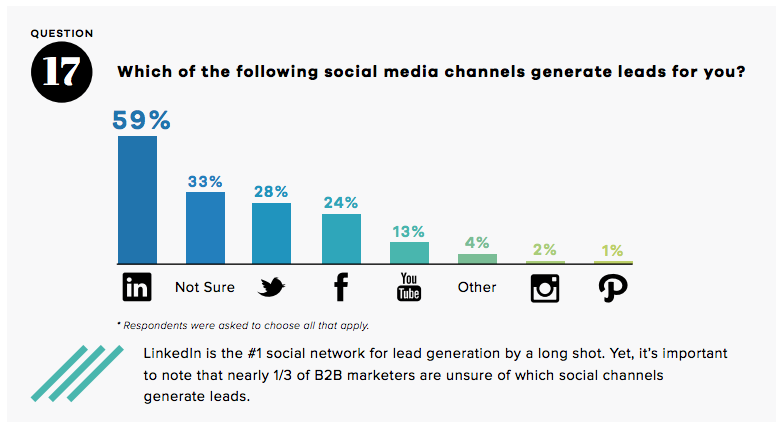 If we take a look at Demand Wave‘s State of B2B Digital Marketing report, we can see that LinkedIn is the number one social network for lead generation for businesses — with Facebook fourth on the list behind Twitter and “Not Sure”.

Despite users not spending nearly as much time on LinkedIn as they do on Facebook, they’re more likely to be in a buying mindset.

Ultimately, both platforms are good for different things. While Facebook gives you access to ten times more prospects and provides a great place to generate brand awareness and engagement, LinkedIn beats Facebook when it comes to generating tangible leads.

Now that we’ve taken a general look at the two platforms and pitted them against each other, let’s take a more detailed look at some of the key features they have for businesses.

The Groups feature on both LinkedIn and Facebook give businesses the chance to mingle and connect with prospects and other like-minded businesses.

However, it’s critical to keep in mind people’s motives when they’re on the different sites. When users are engaging with others in LinkedIn Groups, there’s a high chance they’re in a work-related mindset in some capacity.

In Facebook Groups, on the other hand, people are more likely to share their personal opinions on everything — from lifestyle and food, to politics and hobbies.

So, when determining which Groups feature is best for you, think about the audience you’re targeting.

For instance, if you’re targeting general consumers with an interest in cooking because you’re selling the latest food blender, Facebook Groups is probably the way to go.

However, if you’re selling a high-priced service for top-tier management personnel, LinkedIn Groups’ filled with work-minded professionals might be a better bet.

Both Facebook and LinkedIn provide a diverse range of ad types, including carousel, video, and lead ads. Since Facebook has a larger user base, your ads are capable of reaching more people. With Facebook you can also target based on more personalized information, like behavior or life milestones. However, LinkedIn offers its own targeting capabilities, and is better at lead generation for businesses.

Finally, let’s touch on the Ads aspect of both platforms.

In terms of variety, both platforms have reached pretty equal footing this year.

While Facebook has boasted a diverse range of ad types for years (we’re talking canvas, carousel, video, dynamic, and lead ads just to name a few), LinkedIn has just added a swathe of different ad types to its mix — including video, carousel, lead ads, and Sponsored InMail content.

Targeting-wise, if you think Facebook has the capability of reaching more people, you’re right. However, this doesn’t mean that LinkedIn doesn’t have powerful targeting capabilities — in fact, it very much does.

Both platforms are centered around user input and serve up ads and content relevant to the information their members give them.

In both Facebook and LinkedIn you can target people based on job title, household income, company, location, and age on both platforms, but you can dig a little deeper on Facebook, targeting users depending on their life milestones, behavior, and more personalized information.

If you’re targeting other businesses, it’s worth bearing in mind that the information on LinkedIn (like job titles and employers) tends to be kept up-to-date more than the information on Facebook, which means you might get more accurate hits if you’re specifically trying to reach people in a certain type of role or industry.

Usually, you get more for your money on Facebook. This is simply because there are millions more people on the platform who are on-site for far longer than those on LinkedIn. This means that Facebook can afford to serve cheaper ads, because there is less chance of one user seeing the same ad over and over again.

Who Wins? You Decide

While LinkedIn and Facebook do share some very obvious similarities, it’s clear their purpose, and the way people use each site, is quite different.

Which one you decide to use depends entirely on what industry you’re in, who you’re trying to reach, and your marketing goals.

Ultimately, it’s important to note that, ideally, you’ll use both channels to reach your audience wherever they want to be met. Perhaps you use LinkedIn for a targeted lead generation campaign, while you use Facebook to increase brand awareness and engage with your customers.

At the end of the day, both sites offer valuable opportunities to grow your company. However, you’ll hopefully use this guide to decide which site deserves more of your time and resources, and which can give your company the highest ROI.

VR-Inspired Cocktails Come Served With Their Own Immersive Experiences

Taking A Shot At Beat Saber And Superhot