From the editor: The commentary below is from Sam Adama, owner of Caprica Grid, about the Russia-based freebie grid Sacrarium, which has been accused of hosting stolen content and inappropriate child avatars and accessories. The opinions expressed below are his own. 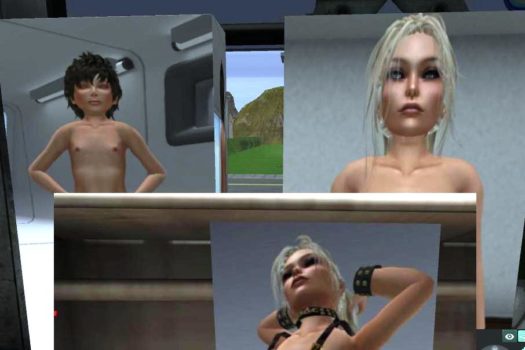 Do not allow yourself to be misled. What the administrators of the Sacrarium grid call “their objects” have never been their objects and are not the property of Sacrarium.

I was inside Sacrarium to find out how everything happens. I will tell you.

Everything, absolutely everything that is on the Sacrarium servers is stolen from Second Life and other grids.

How do they do it? Let me show you.

Most of the content is delivered to them by the so-called Wayda Dreamscape, a Portuguese person with many nicknames and bots throughout the metaverse. She unloads tons of content from Second Life, packs it in so-called “stuff” boxes and distributes them through her region, called “Harbor” on the Sacrarium grid.

From there, these boxes are distributed across all grids, at a colossal scale.

Wayda may wind up causing a very big scandal related to the participation of the Second Life administration and theft of content from there.

Another way to steal content is to steal in other OpenSim grids.

As long as there are grids whose admins use “God Mode” to make things their own, they have the ability to create OAR region exports and reset permissions — nothing can stop them or correct this situation.

So what is going on in Sacrarium? They take things from other grids, then either make them their own by using “God Mode” to reset the permission of the object and distribute it throughout OpenSim.

Have you seen the dragon on my avatar? I personally helped to steal the male and female dragon in one of the grids, after which Sacrarium distributed these dragons under their own brand, violating the copyright of the real owner.

They also violate the requirements of all six Creative Common licenses. The dragons were sold by the owner for money. Now they are stolen and distributed free of charge under the Sacrarium brand.

The third method of theft, about which the owner of Sacrarium personally boasted about to me, is an OAR of foreign regions, including those who are connected to their grid.

I have repeatedly warned people not to link their regions to Sacrarium, since everything that they do in their regions, everything, will be completely stolen, broken and will be distributed under the Sacrarium brand.

A bit about child avatars

A few words about the Sacrarium’s attitude towards commerce

They shout in all directions that they cannot tolerate OpenSim commerce, but they themselves conduct commercial activity, taking real money from their users and selling them regions.

This isn’t widely publicized, but there are fixed region prices and mandatory monthly fees. On their website, this is located under the “Donate Us!” link, but this is actually the standard form of payment for services. They use PayPal to conduct real commercial activity while hating everyone who is trying to make money in OpenSim.

Once again I want to warn you about the dangers of this grid and its administration. They engage in theft, pedophilia and forment conflicts in the metaverse.

I am sure that all the attacks on me personally from Sacrarium are caused by the fact that I know in sufficient detail how their grid works.

Gabriel Moss - July 30, 2019
0
BigScreen VR is a free application with the power to foster connection and social connection. It’s fascinating to me that when the topic of...