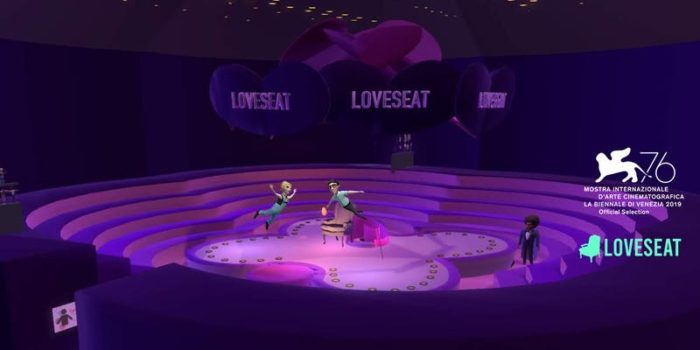 When I was emailed a free invitation to the world’s first theater production combining VR and a real world audience, I figured “Why not?”  I’ve always enjoyed watching live plays, from small local productions all the way to a large scale broadway show, and as a fan of video games and VR in general, I figured the combination of the two could be pretty cool.

Getting into the play was easy.  All I had to do was reserve a free ticket at eventbrite and I was emailed instructions on how to enter the theater through the High Fidelity app.

I happened to catch one of the final performances on September 6, just a day before Loveseat was set to finish.

I’d never used High Fidelity before, but the process was simple enough.  I downloaded the High Fidelity app, put Loveseat in the GOTO section in the window at the time of the performance, and I was in the virtual theater.  I took a couple of minutes to figure out how to move around my avatar, exploring my surroundings as  I did so.

Everything was purple.  Purple bench seating surrounded the purple x-shaped stage, at the center of which was an empty purple armchair, which I supposed was the loveseat itself.

I arrived at the time of the performance and it looked like they were still prepping.  There was a projection of the real audience and the real actors in Venice on a pop up window above the stage.  It was an interesting new experience for me hanging out in an imaginary world watching real-world actors getting into their VR gear while the audience milled about and took their seats.

The real-world audience looked packed while the virtual audience seemed sparse to me.  I think there were never more than 10 people in the virtual audience the whole time I was in the theater.  Not surprising to me as low user turnout seems to be a problem in social VR platforms in general.

I watched the whole production on my computer screen, which was good enough for me since I signed up for the ticket at the last minute,  but I’m sure the whole experience would’ve been even better through a VR headset.

So, what was the whole affair about anyway?

Making its premiere at the 76th Venice International Film Festival, Loveseat is a virtual reality comedy and claims to be the  first ever live play performed simultaneously to virtual and real world audiences, and is the story of two regular people drawn into a reality show competition to win the love of a perfect partner, who is never seen but rather imagined and described by the actors as they talk to the purple chair.

The play claims to be part story and part interaction between virtual and real worlds.  In my experience it was mostly story and a little audience interaction, which was fine with me.  I didn’t get much excitement from making my virtual avatar jump around and wave its arms. The actors perform in front of a live audience in Venice and a virtual audience from around the world at the same time, connected by the social VR platform, High Fidelity.  I did enjoy the two audience aspect, as it made me vaguely feel like I was somehow actually at the Venice Film Festival.

The window displaying the real world actors and audience disappeared once the performance started and our virtual audience was left alone in the mostly empty virtual theater with the actors’ avatars.  The story was cute and the whole thing was over in about 45 minutes. It lasted just long enough that the novelty didn’t wear off for me.

There was some minor audience involvement, such as when we got to vote what object Abby, one of the two main characters, would turn into — a Christmas tree, a marshmallow, or a croissant.  The marshmallow won. 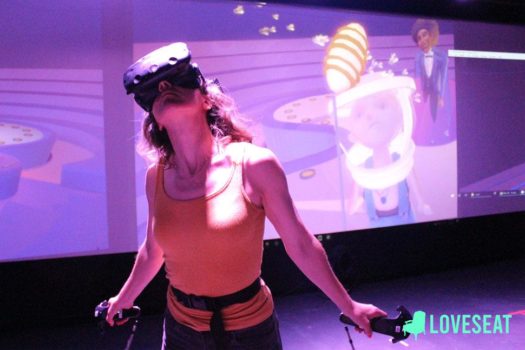 The virtual actors did a few other cool things that you couldn’t easily do in real life, such as when Bruce, the other main character, changes size to become incredibly large and then very tiny, and when they both fly around the room as they talk.  There was a third character, the announcer of the game show Loveseat, who kept the story going along and involved the virtual and real audiences in the action, such as when we voted.

I thought the characters’ avatars were really entertaining.  Their motions, body language, and facial expressions did enough to keep me captivated, and knowing that it was a live performance with real people virtually controlling them instead of a preprogrammed set of movements raised the appeal for me.  I was part of a thing, a collaborative real-world and virtual audience and performers sharing a special event together.

The window to the audience in Venice popped back up after the show, and you could see the real actors take a bow.  After that, the screen was left up, and I could see the real world audience milling about and slowly leaving the theater, which made me feel somewhat like I had just watched a regular theatrical production.

There wasn’t much going on the virtual realm on my end.  I saw and heard a couple of avatars chatting, talking about film a bit and then mentioning how there wasn’t much to do in High Fidelity and not too many people around to interact with.  “Oh well,” I thought and logged out. 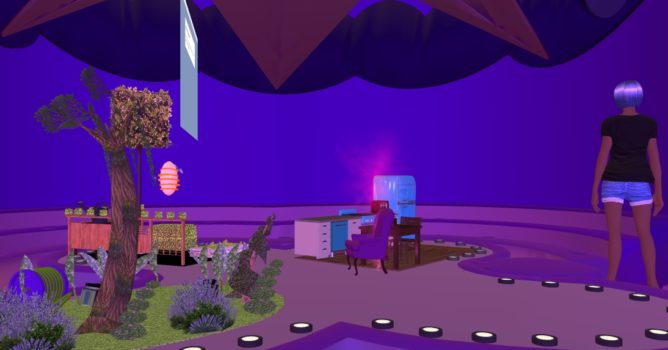 Loveseat set a little while after the performance. There was just one tall avatar left hanging around.

I enjoyed the Loveseat  experience and would possibly watch an event of this sort again.  I think as VR develops and we can hop into VR social platforms that look and feel truly immersive, and not like graphics from video games I played twenty years ago, then the general appeal of these kinds of real-world and virtual-world collaborations will rise and we’ll see more people become involved with live productions of this sort.  I think the cast and tech crew involved with Loveseat did a great job working with the technology and resources available to them at this time.

Xbox Scarlett VR Support Unlikely As ‘Nobody’s Asking’ For It

Jamie Feltham - November 26, 2019
0
If you were holding your breath for Xbox Scarlett VR support, best stop.Xbox head Phil Spencer recently reemphasized his reservations with VR to...