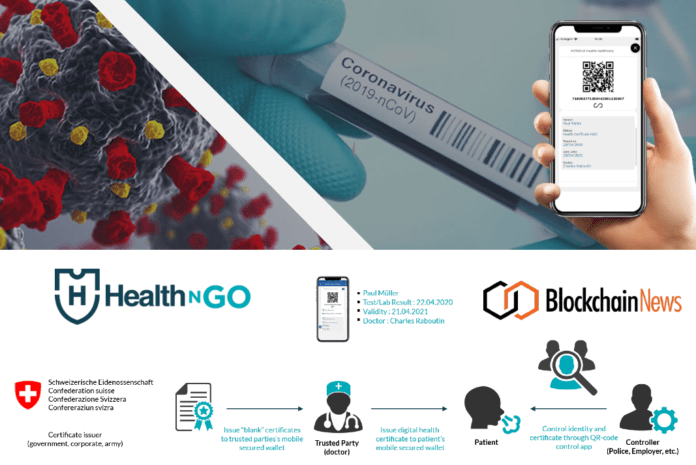 Several Swiss international companies and civil and military organisations are piloting a new blockchain project which can deliver a secure health certificate on a mobile application.

The project, called Health n Go sprouted from a blockchain-driven ticketing company called TIXnGO,  who repurposed their existing blockchain-based technology to create Health n Go Health n Go is capable of securely distributing health certificates at scale and in line with government and corporate needs in managing the pandemic.

“In light of the coronavirus crisis, we can see a potential role for the secure delivery of personal digital assets such as a health certificate. It isn’t for us to define the precise use of this technology, that is a decision to be taken by governments. But as new scientific evidence comes to light and response strategies evolve, we are ready to work with governments and corporations to apply this technology, when they deem the time is right.”

Health n Go is designed to safely deliver digital health certificates from a trusted authority such as a doctor or health organisation. Each time a health certificate is issued in the platform, a unique, encrypted and completely traceable identity is attached to it. Individuals will keep their health certificates on a specific wallet on their smartphone, which can be shown on request and the QR code read by a scanner.

Using artificial intelligence and blockchain technology, the system combats any attempt at certificate fraud. Duplicating or counterfeiting the certificate is prevented thanks to the unique identity of each certificate. The system monitors patterns of attempted fraud which can lead to the revocation of a certificate if required.

The solution can be hosted on a national private or public cloud and is GDPR compliant to address health data requirements.

David Jagneaux - September 5, 2019
0
Marvel Dimension of Heroes is a brand-new AR experience from Lenovo that puts you in the shoes of six of the most iconic...