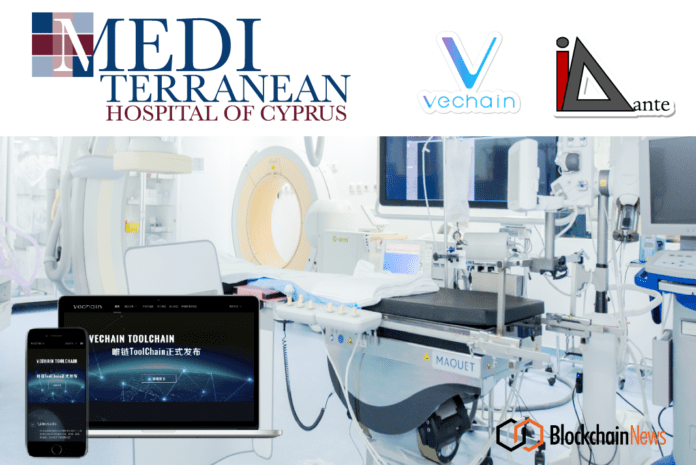 VeChain and technology agency I-Dante recently announced they have co-developed a blockchain-enabled medical data management platform named The E-NewHealthLife and the Mediterranean Hospital of Cyprus, a hospital under the General Healthcare System of the Republic of Cyprus (GHS), is the first hospital to adopt this application. The hospital has 300 employees, 38k outpatient visits in 2019.

In a recent post last week from their Shanghai team, VeChain noted the E-NewHealthLife helps solve the issue to deliver better, more efficient and more effective healthcare solutions that can achieve excellent patient-centric healthcare provision, offer secure data sharing all the while while complying with increasingly strict regulations on the use and sharing of patient data.

The E-NewHealthLife Web App will first be trialed in the Emergency Department of the hospital as the first phase of this project.

Powered by VeChain ToolChain, the Digital Healthcare Passport used, is an encrypted NFC Card that can be assigned to any patient of the hospital. The NFC Cards allow patients to identify themselves automatically at the Emergency Room registration desk, check their queue on mobile phone, manage their own medical records safely with the E-NewHealthLife Web App, and share their data securely with the hospital.

More from the report:

“The blockchain powered application can serve both the hospitals internally and also end users. As The E-NewHealthLife fully complies with the GDPR (EU’s General Data Protection Regulation), the App enables the owner to have complete control over their profile and medical records, which upon their agreement, can be used to prove his or her health status. The App will be used by hospital management and staff to collect and record information on patients and this data pack is owned by the patient. Data can only be shared to 3rd parties with the permission of the owner.”

According to a report by BIS Research, the global healthcare market spending and investment on blockchain-based technologies is expected to hit $5.61 billion by 2025. The adoption of blockchain technology could save the healthcare industry up to $100-$150 billion per year by 2025 in data breach-related costs, IT costs, operations costs, support function costs and personnel costs, and through a reduction in frauds and counterfeit products.

Blockchain alone, and in combination with IoT, AI, Big Data, and emerging cryptoc as the next frontier in healthcare that will help solve some of the industry’s interoperability challenges. Instead of relying on health information exchanges or other ways to aggregate data, the blockchain technology is capable of eliminating the middleman and accessing patient databases on a large, population scale.

Ian Hamilton - September 10, 2019
0
HTC revealed its Vive Cosmos VR headset will be available for pre-order beginning Sept. 12. We still have lots of questions about the new...

The Room VR Is Coming To Headsets Early Next Year

Oculus Cloud Saves Let You Save On Rift, Continue On Quest