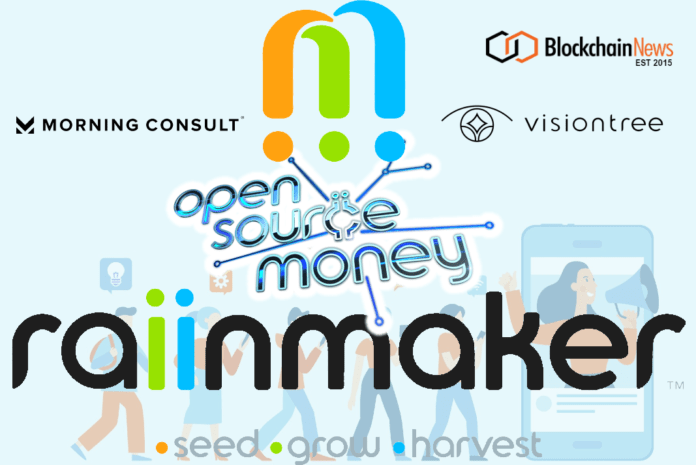 Raiinmaker has released its beta version influencer marketing platform, that empowers fans to share campaigns and be rewarded for endorsements. Utilizing a proprietary algorithm, the company calls ‘Proof of Influence’, companies and projects are now able to measure the return and impact of their campaign spend and provide better experiences to influencers.

The first project to launch with the Raiinmaker app is called Open Source Money, a groundbreaking documentary series airing July 4th, produced by Vision Tree about the evolution of cryptocurrency and blockchain technology. Fans who promote Open Source Money will earn rewards from a $50,000 USD influencer marketing budget for driving digital engagement, with rewards paid fractionally based on specific metrics such as earned likes, comments, shares, and views.

“We’ve created a truly unique way to let consumers take their passion for products and projects and communicate them to followers in a way that is actually monetizable for them, as well as very scalable and measurable for brands.”

“Raiinmaker leverages our expertise in both media and technology to deliver a platform best suited for empowering projects to successfully engage their audiences and to drive the kind of digital word of mouth that cuts through the noise.”

The influencer marketing industry is on track to be worth $15 billion by 2022, according to Business Insider Intelligence, based on Mediakix data. Young people don’t only trust influencers, they want to be them: 86 per cent of Gen Z and Millennials surveyed would post sponsored content for money, and 54 per cent would become an influencer given the opportunity, according to Morning Consult.

Raiinmaker, one of the first influencer marketing apps built on Blockchain, revolutionizes how brands and organizations inspire their audiences to take social action, fueling relevance and loyalty by supporting fans with the tools to create viral conversations around the projects and products they love.

Utilizing disruptive trends such as decentralized identity, single source of truth and as-a-service model; Raiinmaker is able to automate the matchmaking and reconciliation of the influencer management process. The resulting cost at a per influencer engagement is greatly reduced, providing access to a previously untapped audience.

Upcoming projects to be launched on the Raiinmaker platform include the film Atari, produced by Vision Tree Media and Leonardo DiCaprio’s Appian Way Productions, and Moby Fox, a smartwatch content and accessory company with licensing deals for Star Wars, Disney, and Marvel.

Influencers are invited to participate in the Raiinmaker public beta for its first campaign with Open Source Money by signing up here.

Rainmaker’s vision is to create opportunity through access. Raiinmaker is an influencer marketing platform, powered by blockchain, that enables organizations access to influencers of every size and industry. We provide technological solutions to companies and projects to automate the influencer management process, as well as incentivize and reward the passion of its users; harnessing the power of their biggest fans.

Vision Tree creates maximum positive impact and is leading a world paradigm shift through cutting-edge Media and Technology. The company develops and finances a slate of creatively dynamic and commercially viable media properties that have the potential to garner awards and breakout at the box office. In television, Vision Tree is working with partners to build an Unwired Network of Worldwide Distribution that brings together major traditional Network Broadcast companies with short and long-form Digital Platform Distribution. In technology, Vision Tree is amongst the early pioneers in applying Blockchain Technology to Media projects and has strategic investments in new proprietary systems that will revolutionize the entertainment industry. The company’s core mission is to awaken the masses, inspire solutions-based collaboration, and transform humanity’s unfolding story through Social Action Entertainment.

How The Devs Gave The Classic New Life On Oculus Quest

Kevin Ohannessian - July 9, 2019
0
We spoke with the developers of Superhot VR about porting the game to the Oculus Quest and opening up its potential to a...

Oculus Chief Researcher’s Predictions Of The Future Of Virtual Reality