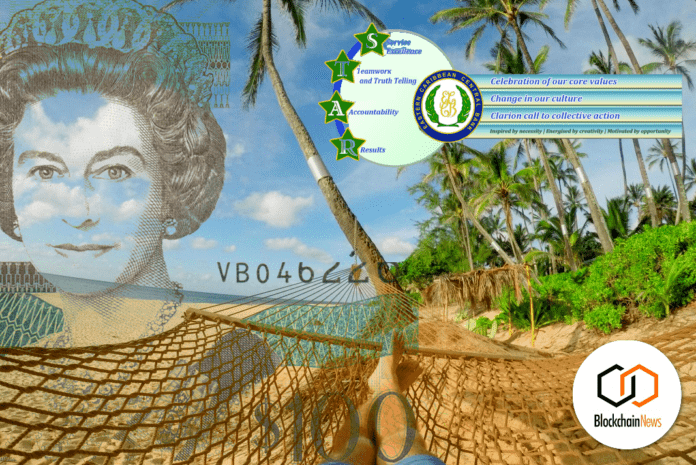 However, as as the ECCB gets closer to the launch of the digital version of the DXCD, the Bank continues to share information and receive feedback from the public on the project, through its Digital Dialogues, the most recent being part three in the series: Pandemic and Digital Currency, which was broadcast on Tuesday, 7 July.

The Bank recently hosted part three in the series: Pandemic and Digital Currency, last Tuesday, 7 July.  The discussion featured a panel of experts from the ECCB who discuss the strong partnerships the Bank has been forging to develop the network and environment for the DXCD project.

Click here for more information on the ECCB Digital Dialogues and registration details to join the conversation, or visit the ECCB Connects Facebook page.

The currency issued by the ECCB is the legal tender of the eight islands, Anguilla, Antigua and Barbuda, Commonwealth of Dominica, Grenada, Montserrat, St Kitts and Nevis, Saint Lucia, and St Vincent and the Grenadines.

But even within that unusual and admirable example of fiscal harmony in the region, there are significant challenges to commerce.

“You can’t really integrate the region if you have to move cash by plane or boat,” said Sybil Welsh, Senior Project Specialist at the ECCB at a CANTO Conversations webinar.

CCB recorded transaction ranges across the currency union. While the currency travels through member islands, banking facilities and transfer capabilities are not implemented as fluidly.

“If you don’t address the frictions, the inefficiencies, then we will not drive the growth trajectory,” Welsh said.

“It is still prohibitive for us to do business with each other, even though we are one bloc because we are paying significant transfer fees.”

The ECCU payment system will require a reexamination of the regulatory framework, the engagement framework and the currency framework and a pilot project using the blockchain-based digital currency, dubbed DXCD will test and expose the issues that arise from turning the promise inherent in money from paper to bits.

The ECCB was not the first Caribbean financial institution to test digital currencies. The Central Bank of The Bahamas has just come to the end of Project Sand Dollar, a pilot effort at establishing a digital currency.

The currency is not a cryptocurrency, but benefits from the developments in FinTech that have fuelled that sector.

ECCB projections for the influence of digital currency on transactions. The bit-based legal tender, backed by the ECCB, uses a peer to peer digital architecture to create a frictionless financial transfer environment within the Eastern Caribbean.

The system uses a secure private blockchain for transparency with the network operator validating transactions.

The ECCB is underwriting the cost of implementing the project along with its infrastructural cost. Network operators in the region have been approached to zero-rate the cost of data transfer via smartphones.

“It is not a matter of getting rid of the banking sector, what’s required is a marriage of FinTech and our brick and mortar banks to create a more resilient financial sector,” Welsh said.

The ECCB would like to see banking evolve in the region, becoming more agile and frictionless and it is creating a regime that it hopes will drive that process.

The ECCB was working on a survey of financial trends in its member nations when Covid-19 interrupted the project, but the authority is sure that a large percentage of the citizens of the region are underbanked, daunted by sometimes staggering fees to transfer money between island states.

The pilot will allow individuals with minor identification requirements to fill digital wallets with up to EC$1,000 in DXCD versions of the currency, with increased requirements allowing larger sums to be converted to bits.

The digital cash has the same fixed exchange rate of $2.7 EC to USD$1.

Payment and verification is a real-time transaction using end-to-end encryption on both sides of the purchase transaction.

Individuals and business with an established relationship with banks will be allowed to work with larger sums.

“You can’t really integrate the region if you have to move cash by plane or boat.”
– Sybil Welsh

In the ECCB model as with most Caribbean central banks, the digital currency is issued by the Central Bank, moves to financial institutions and is then made available to customers.

DXCD is an opportunity for the ECCB to widen the scope of the financial institutions it works with beyond commercial banks and potentially to disintermediate them entirely for some transactions.

It’s a question that many countries are facing as digital currencies lubricate the relationship between the public and the Central Bank resource and increasingly, the commercial banking system and other financial institutions will need to rethink their role in the value chain of finance.

The ECCB was originally created with a mission to maintain the stability of the Eastern Caribbean’s currency and the integrity of the banking system, now it must chart a new course for modern finance for eight small islands facing the challenge of operating with fiscal transparency and accountability in global economies that demanding rigorous legal protections to participate the world’s financial markets.

Next Krim book on its way – Hypergrid Business

The Major VR/AR Conferences And Festivals