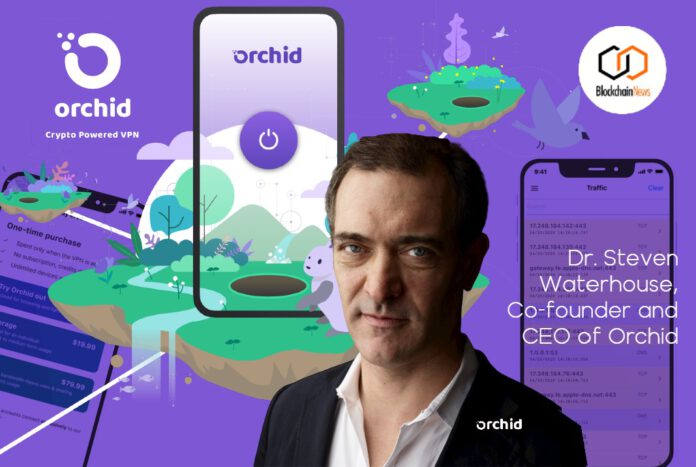 “The App Store availability combined with the ability to make in-app purchases of credits that work with crypto networks represent the latest breakthrough developments to Orchid, stated Dr Steven Waterhouse, Co-founder and CEO of Orchid.”

“To allow anyone to access the Internet freely and safely, we have to make privacy tools accessible and easy to use.”

“Using Apple in-app purchases to use Orchid rather than creating an account with OXT makes it easy for anyone to join our global private network. We’re thrilled to use this technology to move the privacy and crypto industries forward.”

Claiming it as a first-of-kind innovation, Orchid says their users can make in-app purchases of credits that use crypto in the background to purchase VPN bandwidth on the Orchid Network — part of Orchid’s continued mission to make privacy accessible to a worldwide audience and to restore an open and accessible Internet for all.

Orchid works by aggregating bandwidth from VPN services around the world so users can “hop” to one or more networks in order to achieve greater privacy on the internet. In exchange for their bandwidth, providers are compensated with Orchid’s digital currency, OXT. To access the Orchid Network of peer-to-peer bandwidth, users can create an Orchid account using OXT or can now simply purchase credits (like a gift card to use on Orchid) that can be used to access private bandwidth. These credits are completely private and create an additional layer of privacy to further protect individuals.

Traditionally, apps requiring cryptocurrency payments caused users to experience frustration as they completed multiple, complex steps to purchase digital currencies and use web3 browsers or DApps. Frequently, even for simple purchases, users have to wait several minutes for transactions to reach a sufficient number of network node confirmations before the purchase is finalized. Moreover, the acquisition of digital currencies is complicated and often requires the use of multiple exchanges and wallets, each with their own logins, passwords, security procedures, unique interfaces, and individual learning curves.

Orchid solves this highly complicated process by allowing users to use Orchid with a simple Apple in-app purchase vs a multi-step crypto process. Users looking to add a VPN connection from a randomly selected provider can go to their account on the Orchid app and select “Add Hop.” They then can select “Buy Orchid Account,” choose the dollar amount they would like to spend and then confirm their purchase through Apple. When users purchase bandwidth, they are in-fact purchasing pre-filled accounts which are like gift cards spendable on the Orchid Network. Orchid takes steps to protect which pre-filled account is assigned to which specific user, so Orchid users can feel confident in this feature’s enhanced level of privacy. Users wishing to use OXT from their own crypto wallets can still access the network as they did before by selecting the “Crypto Account” option.

Since launching its network and mobile app in December 2019, access to the Orchid Network has expanded through the availability of OXT on exchanges Coinbase, Gemini, Bittrex Global, OKEx, and five new Orchid app language translations (Mandarin, Russian, Indonesian, Korean, and Japanese).

Orchid says they take a new approach to digital privacy with the first peer-to-peer, incentivized privacy network. On the Orchid Network, anyone can buy and sell bandwidth using the Orchid DApp coin (OXT). Users can browse privately and access content without being limited by their geography. With its decentralized design, multi-hop architecture, and Open Source ethos, Orchid offers users unprecedented digital privacy in a trustless context.

David Jagneaux - July 16, 2019
0
Curious about how we livestream the way we do? Then look no further than this handy guide for general tips and this guide specific to our Oculus Quest setup. We’re...

Augmenting Our World: Three AR Trends On The Rise