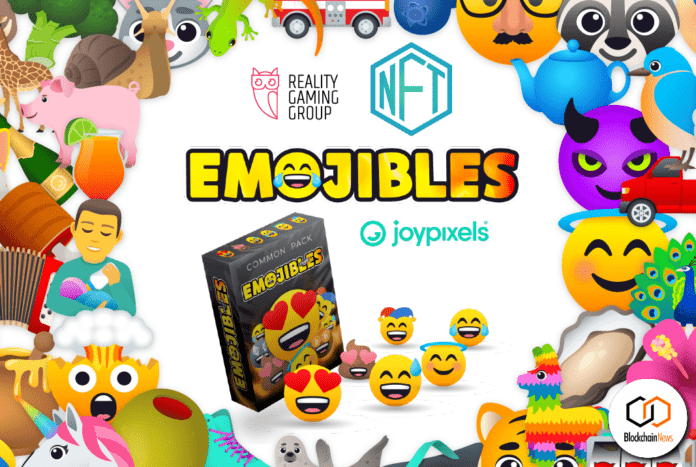 With World Emoji Day fast approaching on July 17, 2020, the blockchain company Reality Gaming Group has announced an exclusive global license from JoyPixels to develop and publish groundbreaking tradable emoji icons and a companion game based on the amazing world of emojis.

Emojibles will enable emoji fans to collect their favourite icons for the first time, before adventuring through a game, Emoji Clash, and battling their friends in real-time contests.

Some Emojibles will be rarer than others, with exclusive Emojibles created just for the game itself and featuring their own unique powers and gameplay.

Emoji fans will be able to start buying Emojibles packs, each containing 10-20 Emojibles, as part of an exciting ‘pre-sale’ period from September 2020 – the drop rates of Epic, Legendary and Godlike emojis in these packs will be reduced drastically after the pre-sale, but they will still be earnable within the Emoji Clash game, though at a considerably slower rate.

Cosmetic Bitcoin, Ethereum, and Translucent skins will also be available for a large number of emojis, and once sold out they will never be available to purchase again unless traded in the Emojible dedicated online marketplace.

Finally, the companion Emojibles game, Emoji Clash, will be released for PC and mobile in 2021, allowing players to go head-to-head with their Emojibles.

Its debut title, mobile AR combat game Reality Clash, was released in 2019 and pushed the boundaries of what’s possible when AR, VR, geo-location and blockchain technology are combined.

“We are tremendously excited to be working with JoyPixels to bring to the huge global emoji fan community an exciting new digital experience. Emojibles are both functional and collectable, so fans can actually own a piece of the Emoji Clash game while they play.”

“JoyPixels is mighty privileged to be partnering with Reality Gaming Group to bring an official emoji NFT featuring our exclusive artwork. Blockchain collectables are just scratching the surface and we’ve been itching for the right opportunity to enter the space. The creative vision and highly regarded team behind RGG give us the confidence that Emojibles will be a true winner that stands out from the crowd!”

The Reality Gaming Group is the developer and publisher of mobile AR combat game Reality Clash, which was released in early-2019 and utilises exciting blockchain technology. It is also the creator of a ground-breaking Digital Asset Trading (DAT) Platform, which can be deployed across a huge range of content types. The Reality Gaming Group development team has more than 20 years’ experience across Mobile, PC, Console, AR and VR games platforms. For more information, visit:

JoyPixels is a full-service emoji licensing company and member of the Unicode Consortium – the governing body of emoji worldwide. JoyPixels pioneered the very first open-source emoji set in 2014, under its former brand EmojiOne. Its signature emoji font has recently launched its 6th generation emoji, titled JoyPixels 6.0. Among other assets, JoyPixels also maintains emoji apps and complimentary icon libraries. JoyPixels has established itself as a dominant emoji provider for digital platforms.

Minecraft Earth Was Downloaded 1.2M Time In Its First Week In...

‘Borderlands 2 VR’ to Launch on PC This Fall, PSVR Version...