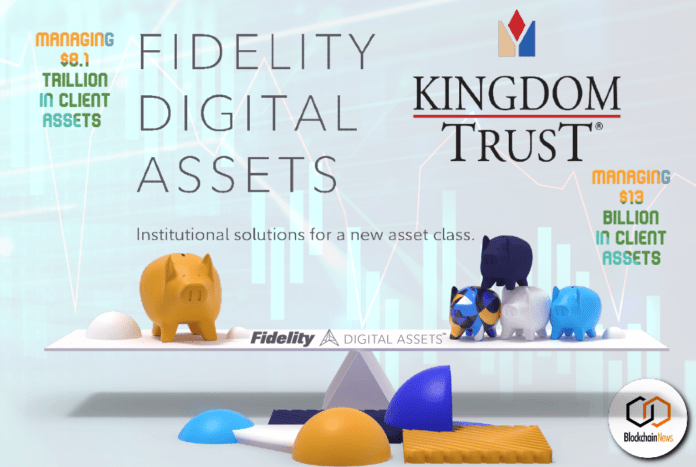 “Personally, I’ve grown to trust the Fidelity family of brands as an individual investor in the traditional markets and now the bitcoin in my Choice retirement account can be kept secure by Fidelity Digital Assets.”

“For anyone who was considering bitcoin as part of their retirement portfolio, but was waiting for the infrastructure to mature and for familiar names to enter the space, that day is today,” stated Ryan Radloff, CEO of Kingdom Trust.

As part of the agreement, Choice members who opt for this solution will not have to manage their own private keys but will choose to have bitcoin held in cold storage exclusively by Fidelity Digital Assets, a leading provider of digital asset custody and execution services to institutional investors, and digital asset business of Fidelity Investments which administers $8.1 trillion in customer assets.

“Since our market entry less than two years ago, we’ve seen significant progress in the infrastructure supporting investors in digital assets, and an evolution in the range of investors adopting digital assets into their portfolios,” said Christine Sandler, Head of Sales and Marketing at Fidelity Digital Assets.

“We welcome innovation in this space and progressive offerings like the Choice retirement account that enable investments in digital assets and ultimately supports the maturation of the entire ecosystem.”

While Fidelity Digital Assets publicly launched their bitcoin custody service for institutional clients in late 2018, this is notably the first time that owners of self-directed IRA accounts who invest in bitcoin will be able to benefit from the infrastructure Fidelity Digital Assets has developed as a result of the exclusive custody agreement with Kingdom Trust.

“Bitcoin held in a tax-advantaged Choice retirement account, with cold storage provided by Fidelity Digital Assets is here. This is a remarkable day for bitcoin and retirement savers who demand choice – we’re humbled to be a part of the solution, said Ryan Radloff, CEO of Kingdom Trust.”

In addition to the cold-storage option announced today, Choice by Kingdom Trust offers memberships which cover the full spectrum of risk from holding your own private keys, to use your bitcoin to subsidize a free account.

Kingdom Trust is an independent qualified custodian regulated by the South Dakota Division of Banking that powers more than 100,000 retirement accounts and provides custody for more than $13 billion worth of assets.

In addition to retirement accounts, Kingdom Trust supports some of the biggest names in finance, providing a range of professional custody and escrow services for hundreds of institutional clients.

One of the world’s largest and most diversified financial services providers with more than $8.1 trillion in client assets under administration, Fidelity’s digital division offers a full-service enterprise-grade platform for securing, trading and supporting digital assets.

Jamie Feltham - September 9, 2019
0
A Valve developer is set to talk about the company’s long-anticipated flagship VR game this week. But don’t get your hopes up too...