Home Blockchain Genobank Closes In On Half a Million Dollars in Equity Crowdfunding at... 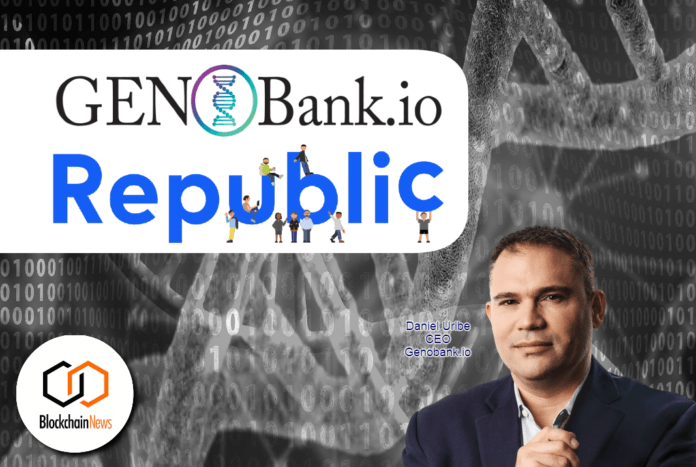 Genobank.io — who claim they are the first-ever anonymous, privacy-preserving DNA extraction kit — has reached $418,000 in crowdfunding from over 1,400 investors around the world in a crowdfunding campaign held at Republic, a FINRA member, SEC-registered funding portal and broker-dealer.

“In 2017 my son was diagnosed with a rare genetic disorder caused by a mutation in his DNA. After looking into various personal genetics companies, I was alarmed at the control they would have over my sons precious DNA. This motivated us to create a solution that puts the power back into consumers hands,” stated Daniel Uribe, CEO, Genobank.io

The crowdfunding opportunity allows a majority of the world’s population to invest as little as $100 in the company in exchange for equity. The investment will enable Genobank.io to offer their DNA test kits to be branded and sponsored by key research institutions. This news is joined by the announcement that Genobank.io has been awarded a $50K grant by VC fund Block.one to use its technology in facilitating anonymous access to COVID-19 testing.

Genobank.io is dedicated to helping individuals in claiming ownership over their exclusive genetic variants while making them available for analysis. According to a study from KPMG, about 65 per cent of people who are interested in taking a DNA test have worries about privacy.

For the first time ever, Genobank.io allows individuals to have their DNA encrypted & stored with confidence and have the option to be compensated by participating in genome-guided clinical trials or health studies using a Blockchain-based data wallet.

The company’s patent-pending technology leverages blockchain and differential privacy to guarantee consumers security and control over humanity’s most precious asset: our DNA. In June 2020, the British Blockchain Association approved and published groundbreaking research that was conducted by Genobank.io’s CEO, Daniel Uribe and Gisele Waters, PhD: “Privacy Laws, Genomics and Non-Fungible-Tokens”.

To support Genobank’s mission to provide the world with control over their DNA and gain a financial stake in their success, visit their equity crowdfunding campaign on Republic.

Republic first launched its equity investment platform in 2016. In 2019, the company created Republic Crypto, providing the first full-stack fundraising solution in the crypto space and in 2020, plan to introduce Republic Labs, an affiliated investment advisory service.

How blockchain adds trust to AI and IoT