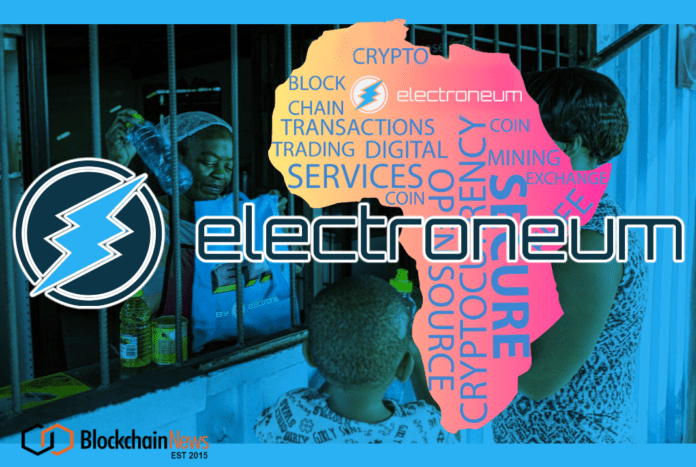 Electroneum has become the world’s first cryptocurrency to enable electricity top-ups with ETN in four African countries – Gambia, Senegal, Nigeria, and Mali – from within their mobile app at a tap of a button.

“Electroneum is one of a handful of cryptocurrencies that are building an ecosystem with real-world use cases, adding value for more than 2.6 million verified app users,” said Richard Ells, CEO, and Founder of the award-winning cryptocurrency. Today, approximately 185,000 mobile top-ups have taken place from within our mobile app.”

In June 2019, market researcher and analyst Lisa Schulte said, cryptocurrency “is not ready for everyday transactions. It needs more time to shift toward a functional currency than an investment.”

However, Electroneum says they are proving Electroneum are industry leaders as its ETN token’s use cases continue to grow.

With 19 per cent of the world’s population currently using cryptocurrency and 14 per cent more saying they are prepared to start using digital assets, most blockchain startups are falling behind in the race to create real-world use cases using their virtual currencies.

Ahead of the curve

However, Electroneum has demonstrated to be ahead of the curve, and in only 30 months since its November 2017 launch, their ETN token can be used to top up mobile phone airtime and data in over 140 countries from within the Electroneum app. Also, nearly 2,000 merchants and service providers around the world accept ETN payments.

As part of their ground-breaking strategy to spark further adoption, Electroneum has enabled electricity top-ups in Nigeria, Gambia, Senegal, and Mali.

Electricity top-ups from within the Electroneum app are very easy. You go to the bottom where it says top-ups. Select electricity top-up and enter the number of the electricity meter and enter a cell phone number where you want to receive notification that your transaction has been completed.

If you have relatives or friends in either of those four African countries, you can top up their electricity meter by following the previous instructions.

With mobile top-ups becoming more prevalent amongst Electroneum app users, the enablement of electricity top-ups and the launch of ETN Everywhere with close to 2,000 brick and mortar and online shops where you can spend ETN, earning ETN on AnyTask makes more sense.

AnyTask – the global freelance platform powered by Electroneum – is still in its soft launch phase. In only just over three months, over 460,000 people have registered to the website as either sellers or buyers. Freelancers have listed over 6,500 tasks in dozens of categories, including video editing, whiteboard animations, tech support, website design, and so much more.

The freelance platform is the first of its kind and the only one that does not charge freelancers any commissions, nor does it require them to have a bank account or PayPal. That unlocks the global digital economy to billions of people who are either unbanked or underserved.

Making a living on AnyTask

“Our next step is to roll-out a targeted marketing campaign aimed at making a living off of AnyTask a reality,” he said “Our first new goal, is to enable that reality for one thousand people, then 5,000 and then 10,000. No other crypto is head in this direction, so this makes us unique.”

Freelancing is particularly exceptional for people in Africa, the most impoverished region in the world. Nigerian AnyTaskers have expressed how significant AnyTask is for them. Unemployment in Nigeria is increasing and currently stands at 30% of the population. The minimum monthly wage is about US$80, and access to the global digital economy is difficult because of the reputation Nigerian email fraudsters have created.

“Most freelance platforms, including Fiverr, require PayPal as a way to get paid, but PayPal does not allow Nigerians to receive funds because of all the email scams,” said Joseph Ogechukwu. He goes by QikFingers on AnyTask. “And so, we are faced with the difficulty of finding others in other countries to get our payment for us.”

Ogechukwu has anxiously been waiting for electricity top-ups from within the Electroneum mobile app.

Ibrahim Adams, or Tecnoidinc on AnyTask, said that apart from that, he does not pay 20 per cent fees on freelance work he sells on Fiverr, which means he has more income to pay for mobile top-ups and now electricity.

“I find paying for airtime and data from within the ETN mobile app very convenient,” he said. “I have been looking forward to electricity top-ups because, at my home, we pay as you go.”

“We have achieved many outstanding objectives in the 30 months since our launch after a record-breaking ICO by participants with 120,000. However, we have many years of hard work ahead of us as we aim to be in a well-deserved position among the top 10 cryptocurrencies in terms of utility,” concluded Richard Ells.

Having attracted nearly 4 million registered users in just under three years, award-winning Electroneum is making great strides toward becoming a top 10 crypto in usability as just over 1,900 merchants, and service providers in over 170 countries around the world accept ETN as payment. More than 2.6 million app downloads have taken place. Approximately 175,000 mobile top-ups and more than 296,000 app-to-app transfers have taken place with ETN by our Electroneum users.

AnyTask is Electroneum’s global freelance platform and has seen over 444,600 people register to the website as either buyers or sellers, with over 6,050 tasks listed. AnyTask does not charge freelancers any fees or commissions, and unlike all other leading freelance platforms that take up two weeks to get freelancers paid, it takes minutes to get paid after the buyer approves a task.

Electroneum is one of the world’s first fully KYC/AML compliant cryptocurrency. It is also one of the few blockchain networks that are insusceptible to a 51% attack. It is the greenest cryptocurrency in existence and the only one to have launched its very own affordable US$40 smartphone designed for the needs of people in developing regions.

In Valve’s Upcoming VR Game Even The Doors Are Simulated In...