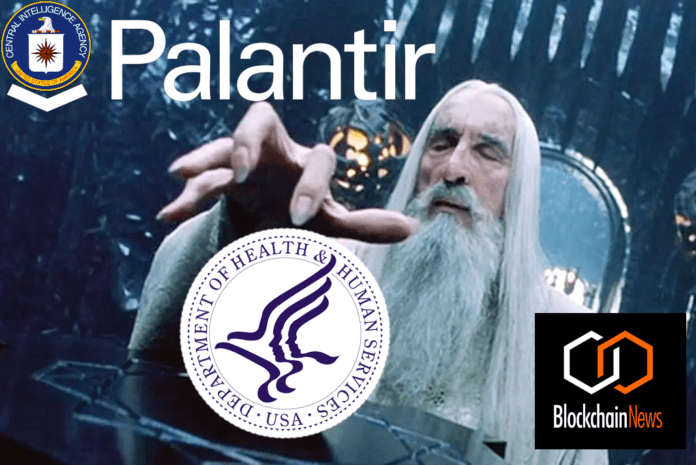 In what was regarded as a highly political move, the U.S. Department of Health and Human Services (HHS) recently took over control of COVID-19 reporting by hospitals from the Center of Disease Control (CDC) and government contractor and big data analytics giant Palantir was awarded the bulk of the project’s blockchain needs without competitive bidding, according to an investigative report at Ledger Insights.

The US Health Department FAQ leaves few clues about what blockchain protocol is being deployed and how Palantir is integrating its controversial technology.  According to reports online, Palantir’s data analysis clients as of 2013 included at least twelve groups within the U.S. government, including the CIA, DHS, NSA, and the FBI.

Palantir has gleaned more than $3 billion in VC funding from investors including In-Q-Tel, the investment arm of the Central Intelligence Agency, Thiel’s Founders Fund, Fidelity and Tiger Global Management.

“In early 2011 Anonymous publicly released HBGary-internal documents, including the plan. The plan proposed Palantir software would “serve as the foundation for all the data collection, integration, analysis, and production efforts.”

Palantir CEO Karp ended all ties to HBGary and issued a statement apologizing to “progressive organizations… and Greenwald … for any involvement that we may have had in these matters.” Palantir placed an employee on leave pending a review by a third-party law firm. The employee was later reinstated.”

In 2018, Morgan Stanley valued Palantir at $6 billion. Since the coronavirus pandemic the value has shot to some $20 billion and the company is planning an IPO according to the New York Times. Founded in 2003 by Peter Thiel, Joe Lonsdale, Nathan Gettings, Stephen Cohen and Alex Karp, who is its chief executive, the company began working with governments, law enforcement and the defence industry to analyze and process their data but has expanded into other areas.