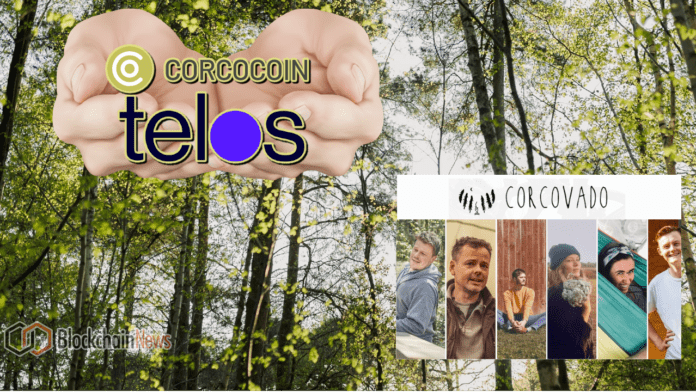 Corcovado, a creative community focused on connection with the natural world, today announced a project called CorcoCoin to accelerate the regenerative economy and help prevent climate disaster with crypto-based rewards for the carbon captured by growing trees.

With CorcoCoin, people can invest £10 (about $13) to have a tree planted. The tree’s photo and GPS location are uploaded to the Telos blockchain, minting a non-fungible TREE token (NFT). As the tree grows and captures carbon, token holders are rewarded with CorcoCoins throughout the tree’s life.

“Our nation’s money systems have become divorced from nature, causing climate annihilation. With CorcoCoin and the TREE token, we hope to restore that fundamental connection of trading goods and services amongst friends in our global village to create a regenerative relationship, not an extractive one,” said Dave Erasmus, Co-Founder of Corcovado. “It is only due to the dedicated efforts from the fellow designers that we have got this far. I want to thank Roger Davies, Rory Mapstone, Jim Hewitt, Simon Elgar, Nezir, Jim Mann, Andy Smithyman, the people who dug and planted our first trees, and the 50 founding TREE token holders who jumped in to support the original idea through crowdfunding.”

“There is enormous potential to benefit the future of humanity and our planet through regenerative practices done today. But because the costs and work of these projects are in the present while the benefits are in the distant future, there’s little direct incentive for individuals to take the actions needed today. Everyone just hopes others will do the work,” said Douglas Horn, Telos Chief Architect and whitepaper author. “Corcovado is building a way to move some of the rewards for these activities into the present or near future for those providing the funding or work now. This breaks the ‘Tragedy of the Commons’ logjam and incentivizes action. At Telos, we’re thrilled to support the type of innovation that leads to a more sustainable future.”

CorcoCoin is supported by a grant from the Telos Foundation, with Telos providing the blockchain infrastructure for the project. The Telos UK team initiated this partnership and worked closely with Corcovado to build on top of the Telos blockchain. Once an NFT is created for each tree, token holders will be able to gift their tokenized trees to others or trade their CorcoCoins on exchanges using the CorcoCoin web app.

Plants use the sun’s energy to take carbon dioxide (CO2) out of the air and water, converting it to wood and releasing oxygen. As they capture CO2, trees help offset emissions. Researchers say that forest restoration may be the best climate change solution available today, with the potential to cut carbon dioxide in the atmosphere by up to 25 per cent. Corcovado ensures that a variety of native species are planted, and depending on the tree, token holders could track their trees for up to 60 years. More than 1,000 trees have already been planted through Corcovado’s initiative, starting in Scotland. Photos of the trees being planted can be found here.

The Corcovado Project emerged after friends recommended that Dave visit Costa Rica’s Corcovado Rainforest, where 2.5 per cent of the world’s biodiversity is represented. Inspired to continue this experience, Dave partnered with an estate to sit in 25 acres of woodland in Sussex, England observing, writing, and reflecting on his surroundings. He began sharing his experiences on his YouTube channel, growing an audience in 150+ countries, and working to support the growing community that began to visit and co-create. The ‘Corco Community’ now has local bases and events in areas ranging from Mexico to Melbourne and all across Europe.

CorcoCoin is now live. To purchase a tree and start earning rewards on the Telos blockchain, please visit here. To shop with your TREE tokens, please visit the store.

Corcovado is a creative community focused on connection with the natural world. The project was co-founded by friends from around the world meeting in diversity and interdependence and embracing the adventure that emerges from holding these values. CorcoCoin is a Telos-based cryptocurrency that rewards users who invest in the planting of trees. Each CorcoCoin represents 1kg of captured Co2e.

The Corcovado Project was created by Dave Erasmus after a mind-altering trip to Costa Rica’s Corcovado Rainforest in which he spent time under the same canopy as 2.5% of the world’s biodiversity. In just a few short weeks, the frenzy of modern-day life evaporated and Dave felt a resounding sense of peace that fuelled a deep level of creative thinking. The impact of both the Corcovado Rainforest and the culture of the Costa Rican people and their lifestyle (Google ‘pura vida’) inspired Dave to recreate a similar environment closer to home.  In 2016, Erasmus set out on a personal experiment to get back to basics and learn from nature: he ventured into the woods in Sussex, England with no goals or agenda, living in a simple shepherds hut, and spent a year observing, writing, reflecting and simply being

Dave began to document his experiences on camera and shared his videos weekly on his YouTube channel. His 50+ vlog series soon gained popularity online, with more than 2 million views from over 150 countries, and before he knew it, people from across the globe were connecting with his story, offering tips for outdoor living and even sending over tools and equipment to assist him.

Aside from the video series, he also produced the Corcovado Handbook and a short film, Once Around The Sun.  What started as a personal journey in V1 soon evolved into a social experiment as the Corcovado Project began to connect people across the world through the values of community, connectedness, nature and creativity. It was towards the end of V1 that the next chapter of Corcovado emerged…

V2 is creating a network of physical spaces in the natural world (CorcoHubs) that can be shared with the CorcoCommunity through private visits and public events. There are now four networked locations in England, Scotland, France and Spain with more on the radar including Pakistan, Mexico and Rwanda.

In November 2018, the four established CorcoHubs came together to host The Swirl Tour –  a series of intimate micro-festivals featuring live performances, craft workshops, talks and walks in nature.

But the CorcoCommunity isn’t just physical or analogue, it is also flourishing on a personal and digital level. CorcoCreators come together across the globe to contribute their own ideas and share their creations whether that be through writing, painting, singing, building, or gardening. V2 is digitally alive on YouTube, Instagram, Facebook, Medium and Slack. As with V1, a number of creative materials are emerging from V2 including a YouTube video series, another Corcovado Handbook, and a film based on The Swirl Tour.

Telos is a high-capacity network and one of the most active blockchain platforms in the world according to Blocktivity. Telos features a robust, third-generation blockchain governance system including advanced voting features and smart contracts that can be fully configured to meet the needs of any developer. Created by developers for developers, Telos extends its state-of-the-art blockchain and governance features to all DApps on its platform, delivering the best user experience in the marketplace. Telos also supports the blockchain ecosystem by serving as an incubator and accelerator for decentralized applications. For more information, please visit Telos.

VR-Inspired Cocktails Come Served With Their Own Immersive Experiences